The Archaeological Museum of Delphi is one of the most important museums in Greece. It presents the history of the Temple of Apollo at Delphi and of the most famous oracle in the ancient Greek world. In the fourteen rooms of the museum, architectural elements are displayed as well as statues and minor works of art which were devoted to the Oracle of Delphi by visitors. There is also a laboratory for the conservation of ceramic and metallic objects, as well as a laboratory for the restoration of mosaics. The exhibits were enriched and rearranged, and the museum was renovated and reopened to visitors in 2004. The statue of Iniohos, which attracts the interest of thousands of visitors, holds the most important position in the museum. More exhibits which should not be missed are: the Sphinx of Naxos, the parts of the frieze of the Siphnian treasury, the fragments of the metope illustrating the labors of Hercules and the Athenean Treasury, the Omphalos of Delphi and the statues of the mythical brothers Kleobis and Biton.

In the museum premises, there are specially designed ramps and lifts so that the exhibits are accessible to people with disabilities.

Tip: If you wish for a tour by a specialised guide, make sure you book one in advance as there is usually no one available on site.

To find information on the hours/days that the museum is open to the public make sure you call beforehand as opening hours vary depending on the season.

Feelings of admiration and awe overwhelm the visitors of the archaeological site of Delphi, as nature and history blend in full harmony offering unique moments in a magical landscape. The site includes the ancient Roman Agora, remnant of the Roman reign in Delphi, the Sacred Way, the Athenian Treasury, the Siphnian Treasury, the Temple of Athena Pronaia and of course the most magnificent monument of the archaeological site, the Temple of Apollo. This is where the oracles were uttered, this is where the rituals were performed and where the believers queued to enter the temple after they had washed and purified themselves in the famous Castalia spring. In the same spring, Pythia used to wash and purify herself along with the priests and the officiants of the temple.

Standing on the highest point of the archaeological site, overlooking the Ancient Stadium and the Ancient Theater, the visitors can admire the view of the canyon and of the mountain sides which is breathtaking -and the energy of the place is unique. The myths come to life when they look at the Temple of Apollo and they are tempted to seek for their own oracle on their departure from this holy place.Tel.: 2265082312Ticket: Full:  €12, Reduced Rate: €6

Tip: If you wish for a tour by a specialised guide, make sure you book in advance as there is usually no one available on site.

To find information on the hours/days that the museum is open to the public make sure you call beforehand as opening hours vary depending on the season.

The greatest byzantine monument of 11th century Greece, the Monastery of Hosios Lucas of Steiris, is built on a picturesque slope on the western side of  mount Elikonas, near the ancient Steirida. The natural landscape has not been destroyed by building residences or any other kind of activities and preserves its authenticity. Since 1990, the monastery has been included in the UNESCO list of world heritage sites. The monastery with its two big churches (the Theotokos or Panaghia -Holly Mary- and the Katholicon), the crypt, the bell tower, the cells and all the other structures gives birth to feelings of religious awe to the pilgrims and constitute an architectural case study for the experts.

The Corycian Cave is the most impressive cave in Greece. It is located in an altitude of 1350 meters, in the northwest side of  Mount Parnassus in a beautiful forest full of endemic Greek fir trees and rare wild flowers. During antiquity, the cave was known as the «Delphic Antron» or «Bacchic Cave». The entrance of the cave is almost out of sight, triangular and narrow, but once the visitor enters the cave, the main chamber becomes bigger, reaching a height of 60 meters. Its stalactites look like sculptures and they are lit in a very special way from the light that comes in from its triangular mouth. The locals call the cave «Sarantavli» due to its amazing acoustics in its great chamber. The cave is positioned in such a way that it offers a magnificent view to the ski centers of Parnassos and the area of Livadi in Arachova. If you are a hiking enthusiast, we would suggest you reach the cave walking through the paths (see details below), in order to admire the unique location of Delphi as a natural amphitheater with the sea as a background.

The cave was dedicated to the god Pana and the Corycian Nymphs, daughters of the river Kleistos and Corycian. According to Aischylos, the cave was a place of visit for the spirits of the gods. In 1970, Pierre Amandry explored the cave, bringing to light findings from the Neolithic era and elements which prove that the area was really a place of worship of ancient gods. The big number of bunions (animals’ ankles) found there is really interesting, something that scientists think used to be either a children’s toy or objects of magic. Some of the findings of the cave can be found in the Archaeological Museum of Delphi.

During the Persian Wars, in 480 BC more specifically, the residents of Delphi found refuge in this cave. It was also used by Odysseas Androutsos as a refuge during the years of the Greek revolution (1821-1824).

How to get there

By car: The road is an easily accessible dust road but a 4×4 vehicle is recommended for the drive. In the 7th kilometer of the Arachova-Eptalofos road, in Kalyvia, Livadi, turn left when you see the road sign for Kroki. Then, follow the signs for the Corycean Cave, and you will end up in an opening where a small path of 50m starts and will lead you to the cave.

For trekkers: There are two routes for trekkers. The first one starts from Livadi, in Arachova and stretches for 3,5 kilometers and is considered to be one of the most beautiful trekking paths in Greece. The second choice, for the bravest ones, is the route starting from the ancient path, which the pilgrims used to follow from Delphi to reach the cave. A big part of the path is still intact until today and is a part of the European path E4, which starts from the Archaeological Museum of Delphi and goes on for a 3.5 hour walk.

Delphi offers many nature trails for hiking, giving you the opportunity to enjoy the natural beauty of the environment and receive all the energy of this place. On every trail, the Corinthian Gulf and the mountains of the Peloponnese embrace you, while antiquity and present become one in an unprecedented explosion of emotions.

The trails we suggest are:

Delphi is the ultimate summer destination as you can enjoy the archaeological sites without missing out on your swims in the sea. In a route stretching from Itea to Galaxidi you can find many beaches and enjoy your swim in crystal-clear waters. We would definitely suggest a stop in the picturesque town of Galaxidi, so that you can enjoy its majestic beauty which takes you back in time. Galaxidi is ideal for a wonderful walk by the sea and for a stop to eat in one of the many traditional taverns of the village, where the fishermen deliver fresh fish in a daily basis. Don’t miss it!

Kastalia Boutique Hotel has twenty-four (24) fully equipped rooms, ready to accommodate and satisfy the needs of every visitor.

Overlooking the Delphi valley and the sea, decorated in a modern or traditional style, all rooms offer peace and tranquility, thus completing the positive energy the visitor receives from this unique, sacred place.

You can find out more about which cookies we are using or switch them off in settings. 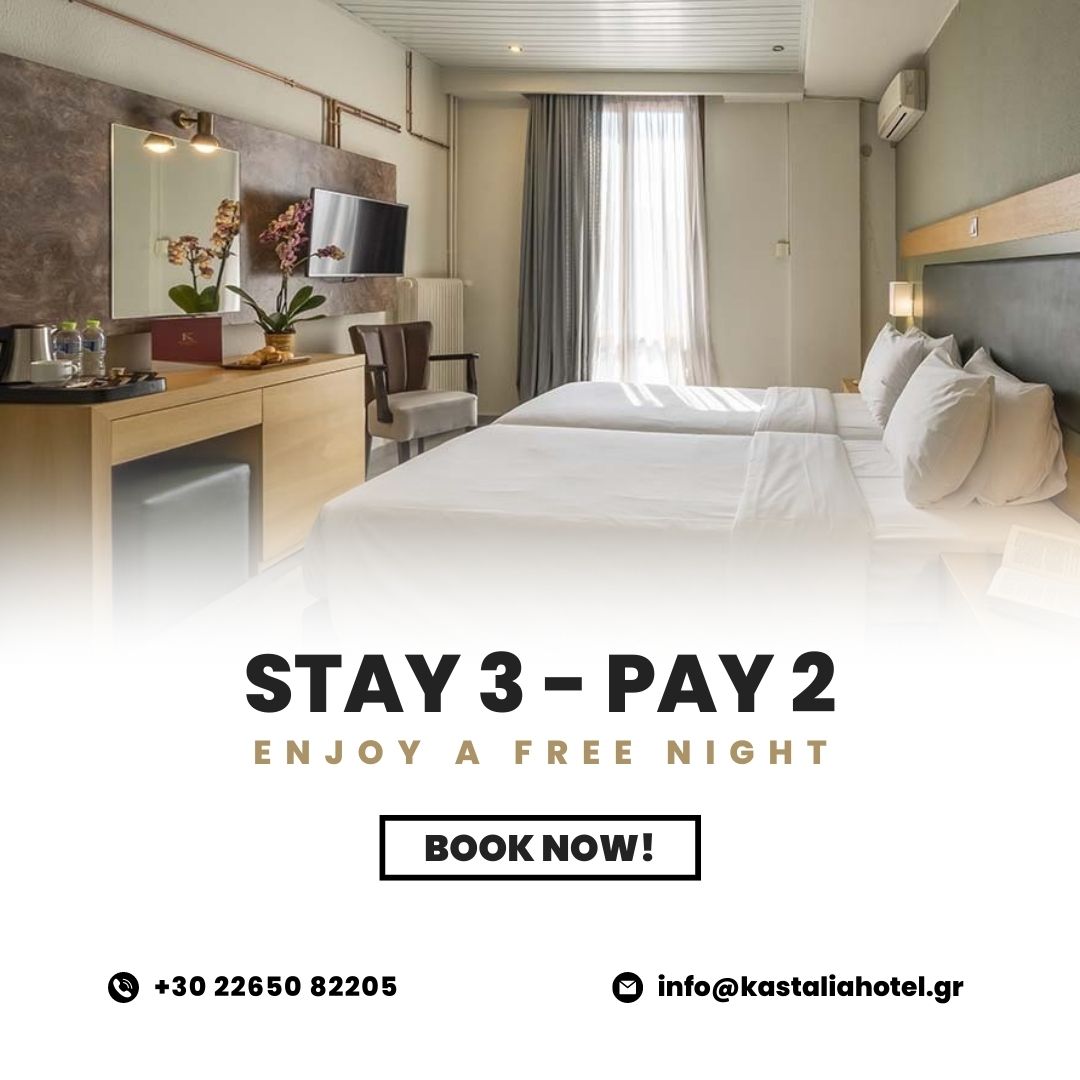 * bookings only by phone or email

This website uses cookies so that we can provide you with the best user experience possible. Cookie information is stored in your browser and performs functions such as recognising you when you return to our website and helping our team to understand which sections of the website you find most interesting and useful.

Strictly Necessary Cookie should be enabled at all times so that we can save your preferences for cookie settings.

If you disable this cookie, we will not be able to save your preferences. This means that every time you visit this website you will need to enable or disable cookies again.

We use cookies and/or similar technologies to analyse customer behaviour, administer the website, track users’ movements, and to collect information about users. This is done in order to personalise and enhance your experience with us.

You can remove cookies stored in your computer via your browser settings. Alternatively, you can control some 3rd party cookies by using a privacy enhancement platform such as optout.aboutads.info or youronlinechoices.com. For more information about cookies, visit allaboutcookies.org.